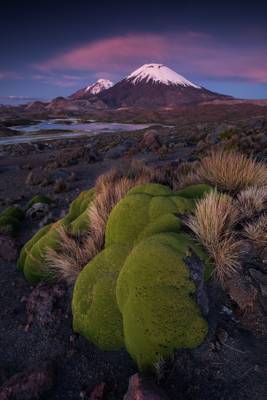 Yareta or llareta is a flowering plant in the family Apiaceae native to South America. It grows in the Puna grasslands of the Andes in Peru, Bolivia, northern Chile, and western Argentina at altitudes between 3,200 and 5,200 metres (10,500 and 17,100 ft).

Yareta is an evergreen perennial with pink or lavender flowers. The self-fertile flowers are hermaphroditic and are pollinated by insects.

The plant prefers sandy, well-drained soils. It can grow in nutritionally poor soils that are acidic, neutral, or basic (alkaline) at altitudes of up to 5,200 metres (17,100 ft). Yareta is well-adapted to high insolation rates typical of the Andes highlands and cannot grow in shade. The plant's leaves grow into an extremely compact, dense mat that reduces heat and water loss. This mat grows near the ground where air temperature is one or two degrees Celsius higher than the mean air temperature. This temperature difference is a result of the longwave radiation re-radiated by the soil surface (which is usually dark gray to black in the Puna).

Yareta is estimated to grow approximately 1.5 centimetres (0.59 in) per year. Many yaretas are estimated to be over 3,000 years old. It is traditionally harvested for fuel, but its very slow growth makes this practice highly unsustainable. (source: Wikipedia)

Since it grows in mountain regions, there usually isn't a shortage of nice landscapes around to accompany the plant. Possibly the best spot to photograph it around Parinacota volcano in Chile - Bolivia border region. The snow covered volcanoes nicely complement the plant.