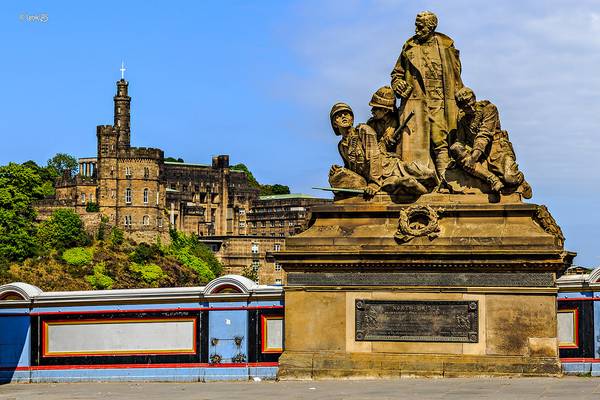 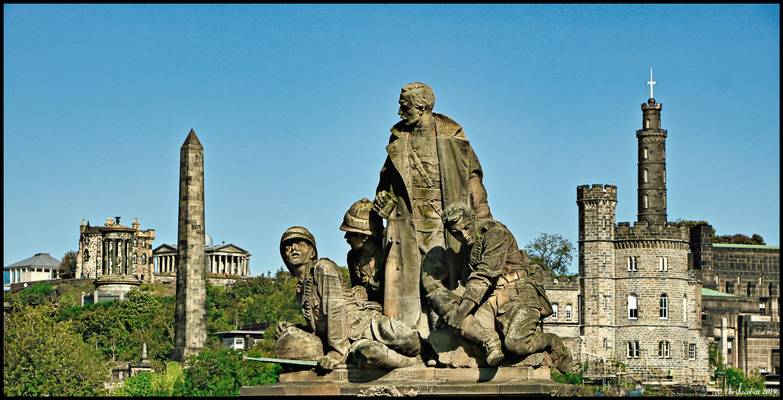 The main feature of the Photo is the war memorial situated in the middle of North Bridge, and is in commemoration to the soldiers of the King's Own Scottish Borderers killed in campaigns between 1878 and 1902.

Then reading the photo from left to right

The “Gothic Tower” (circa 1792) siting behind the circular “Dugald Stewart Monument” (1831) was the location of the original Edinburgh City Observatory. The Observatory is now in the building with the appearance of a “Greek temple” called the Playfair Building, after its designer William Playfair.

The Obelisk in the fore ground, was erected in 1844 by The Friends of Parliamentary Reform, to the men that were martyred in 1793 and 1794 when they were transported to Australia, for having the temerity to ask for the vote for ordinary working men.

To the far right top is the “Nelson Monument” which sits on the highest point of “Calton Hill”, On top of the tower is a time ball, a large ball which was raised and lowered to mark the time. It was installed in 1853 to act as a time signal to the ships in Edinburgh's port of Leith, and to ships at the anchorage in the Firth of Forth.It is raised just before 1pm, and at precisely 1pm, is dropped from atop the mast and signals the firing of “The One O’Clock Gun” from Edinburgh Castle.

The Turreted building on bottom right is the Governor’s House (1817) and is all that remains of “Calton Jail”, once the largest prison in Scotland, until recently it was used as offices for Scottish Government.