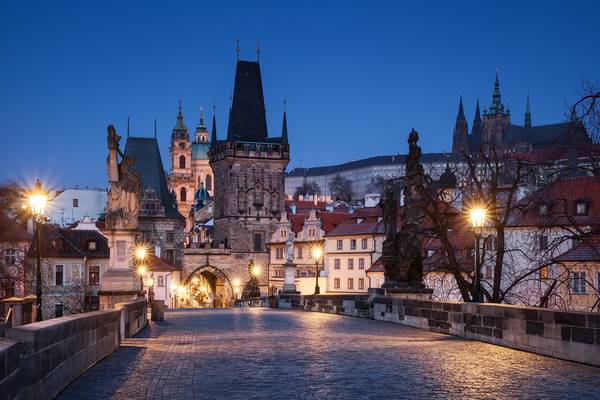 Morning on the Charles Bridge by Michael

Charles Bridge (Czech: Karlův most) is a historic bridge that crosses the Vltava river in Prague, Czech Republic. Its construction started in 1357 under the auspices of King Charles IV. The bridge replaced the old Judith Bridge that had been badly damaged by a flood in 1342. This new bridge was originally called Stone Bridge (Kamenný most) or Prague Bridge (Pražský most) but has been "Charles Bridge" since 1870. As the only means of crossing the river Vltava (Moldau) until 1841, Charles Bridge was the most important connection between Prague Castle and the city's Old Town and adjacent areas. This "solid-land" connection made Prague important as a trade route between Eastern and Western Europe.

The bridge is 621 metres long and nearly 10 metres wide, following the example of the Stone Bridge in Regensburg, it was built as a bow bridge with 16 arches shielded by ice guards. It is protected by three bridge towers, two on the Lesser Quarter side (including the Lesser Town Bridge Tower) and one on the Old Town side, the Old Town Bridge Tower. The bridge is decorated by a continuous alley of 30 statues and statuaries, most of them baroque-style, originally erected around 1700 but now all replaced by replicas. (source: Wikipedia)

Photographing on the bridge 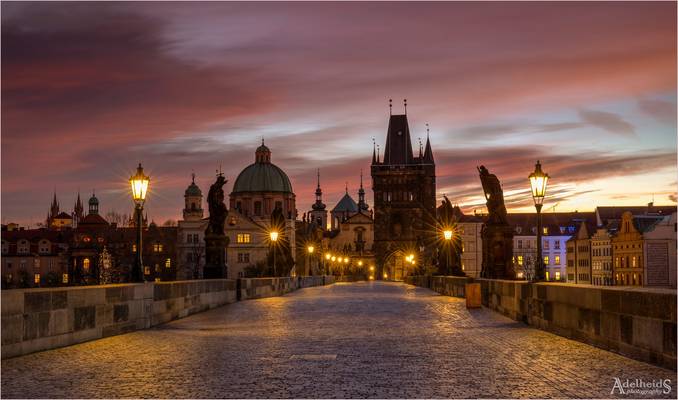 Morning on the Charles Bridge by Adelheid Smitt

Photographs taken directly from the Charles Bridge can use the beautiful statues and historical lanterns as a very interesting foreground that adds depth to the scene. In the eastern direction the bridge leads eyes to the Old Town Bridge Tower, while the western direction is dominated by the Lesser Town Tower Bridge and particularly the Prague Castle. Equally impressive results can be achieved by focusing on some of the statues and leaving the Bridge Towers out of composition (or giving them only a minor role).

The bridge is very popular, expect a lot of people there, particularly since late morning to late night. One option to avoid the crowds is to be there early, dawn to sunrise is a very good time when you can only expect a few other photographers. Another option is to set up a long exposure (certainly a tripod is a must then) and either blur movement of the crowds, or get rid of all the people entirely.

From the right side of Vltava

The right Vltava embankment is the most popular spot to photograph Charles Bridge, because the photographs can include it together with the Prague Castle. These two gems work very well together, the Bridge can lead eyes to the Castle, resulting in some very pleasant compositions.

Very classical panorama of Prague, with a depth added by railing by Zbyněk Hruboš

The two historical landmarks can dominate photographs taken either very close or further South from the Bridge. The spots to the North are less popular, but they also deserve your attention.

Dusk is probably the best time from this direction, since the light is already soft and both the Bridge and Castle start to be nicely illuminated by artificial lights. The same generally applies to Dawn up to Sunrise. Sunsets usually don't cast enough light to the Prague Castle, because both the Castle and Sun are in the western direction. Only in Winter Sun sets early enough in the North-West to cast its warm evening light on the Castle.

From the left side of Vltava 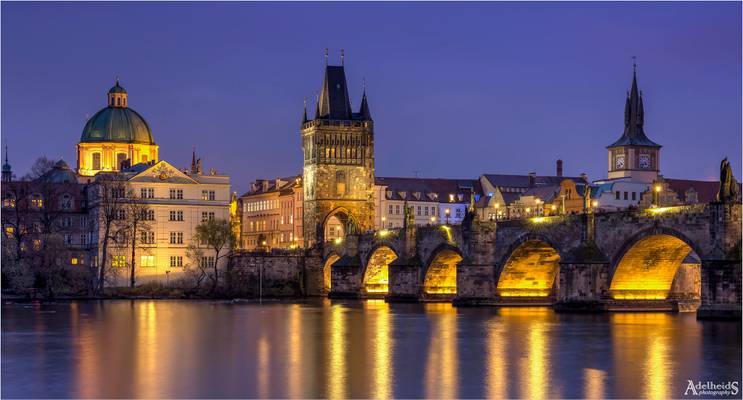 Charles Bridge from the left bank of Vltava by Adelheid Smitt

While spots on the left side of Vltava can't offer compositions with the Prague Castle, they are really worth checking out! The Charles Bridge can lead eyes to the beautiful Old Town Bridge Tower and also several more nice old buildings can be included. The left side has the benefit of missing a massive embankment and so you can be right next to the river, which lets you to include some interesting foregrounds, like rocks or birds (most often swans), or get the perspective from below the Bridge. 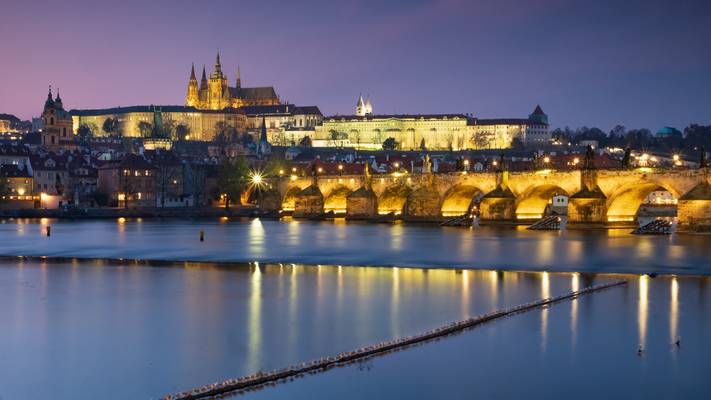 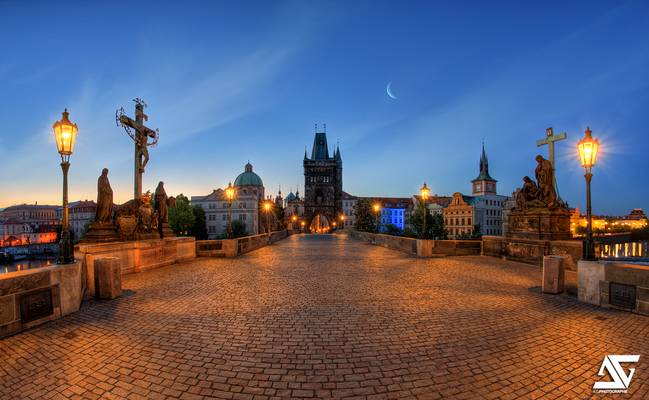 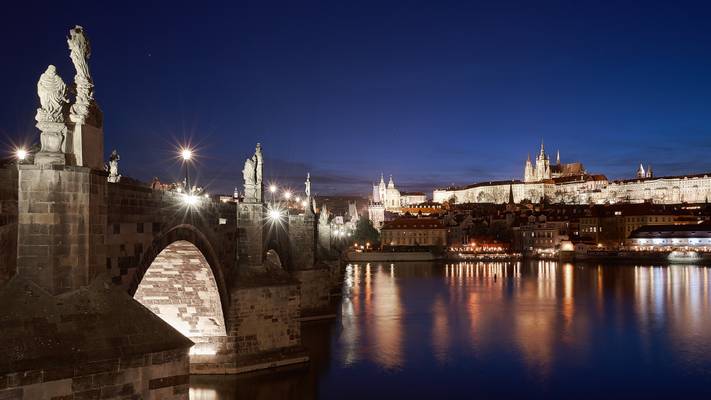 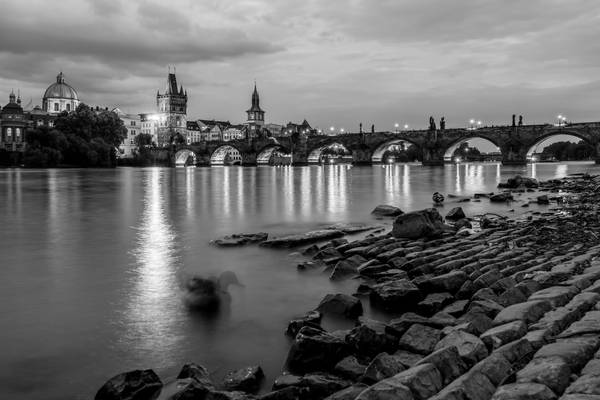 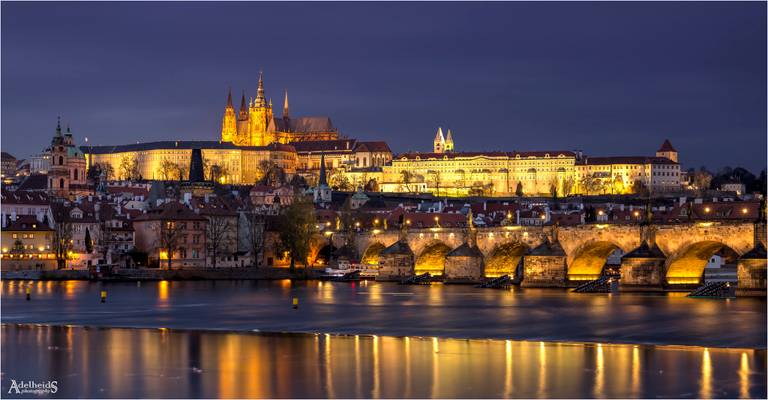 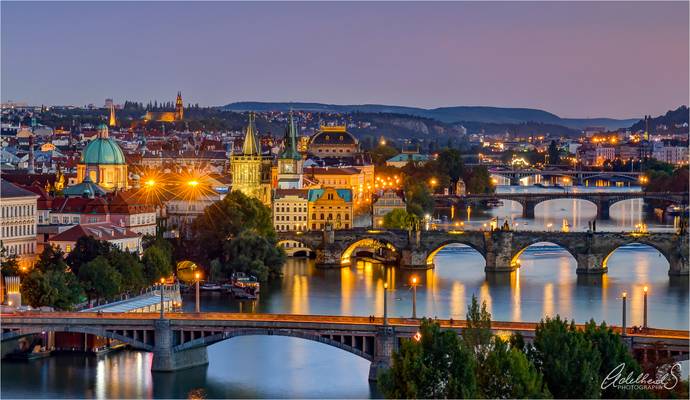 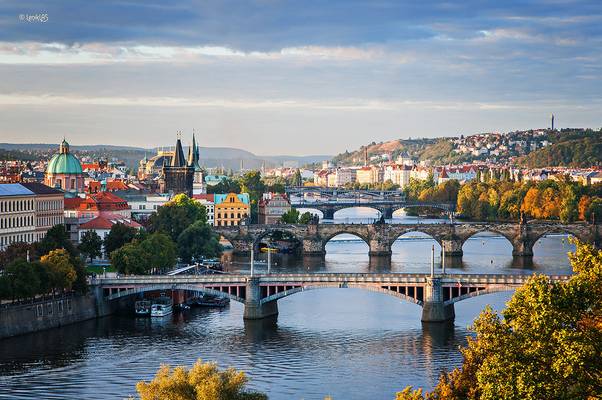